One of the biggest concerns with releasing a dataset is the risk that a potential attacker can identify the owners of particular records. Even though masking or removing unique identifiers, like names and Social Security Numbers, can reduce that risk substantially, it may still not be enough. Harvard professor Latanya Sweeney reported that 87% of the U.S population can be identified using only their gender, date of birth, and a 5-digit zip code1.

To prevent privacy breaches and comply with the Health Insurance Portability and Accountability Act (HIPAA) and GDPR Recital 26, you should also de-identify such “quasi-identifiers” (along with “key identifiers” like name and SSN) to the point where the risk of re-identification is statistically moot2. IRI data masking software is designed to do that, but how do you assess the results?

This article shows how to credibly score the re-identification risk of data de-identified with IRI FieldShield, CellShield or Voracity using the risk scoring wizard now available as a plugin to IRI Workbench. While it was designed with HIPAA EDM security rule in mind, student data privacy laws like FERPA also indicates the application of such an approach.

In our example, we are going to analyze the re-ID risk of a delimited file with the unique identifier having already been masked by FieldShield. Our interest is now to ascertain that the dataset cannot be re-identified through its quasi-identifiers alone. 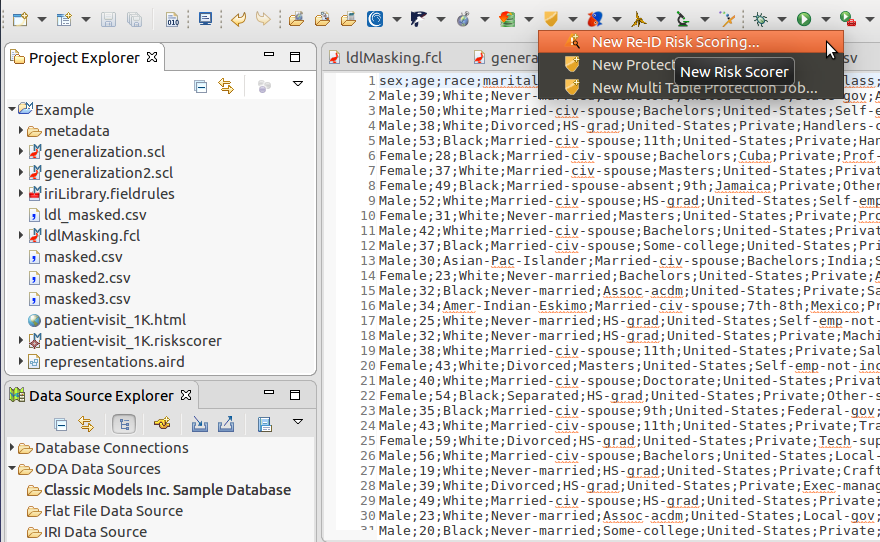 Once you have opened the Re-ID Scoring wizard you are prompted to select the source of the dataset that you wish to score. The wizard can take either flat, character delimited files, like Comma-Separated Values (CSV) or Tab-Separated Values (TSV) files, or a database table connected in Workbench via its Data Tools Platform (DTP) plug-in, as seen in the Data Source Explorer.

Depending on the choice, you will be required to provide specific configuration details on the next page. For flat files, the file path must be provided, along with the character set, delimiter, and frame character used within the dataset. For databases, a Connection Profile from one of the DTP connections and the corresponding Database Table need to be selected from a dropdown list or otherwise created from a dialog in the wizard.

Both file and table scoring require you to specify the Superset Region that will be used to estimate the uniqueness of your dataset against a broader population. The region should match the national background of the most amount of records within your dataset. 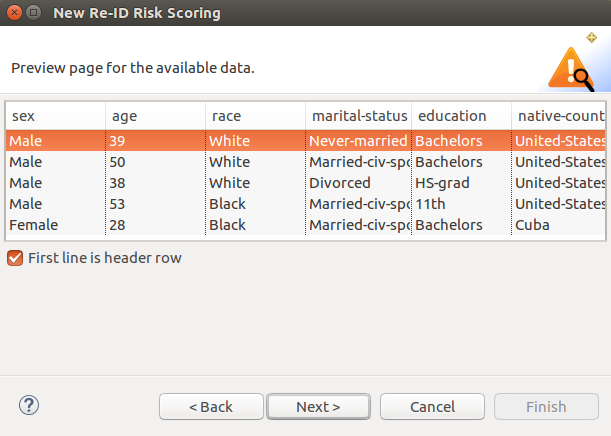 To ensure that you have correctly configured your data source, a preview page shows a subset of your data which the wizard structured based on your configuration. For flat files, the delimiter and frame characters will influence the number of records and how each individual attribute is separated from one another.

If your dataset is incorrectly delimited or shows up with an error in the preview, you may need to go back to the previous step and enter the correct configuration options. For flat files there is an additional option to specify if the first line within the file is a header row. Otherwise, default field names will be provided and used in the risk score. 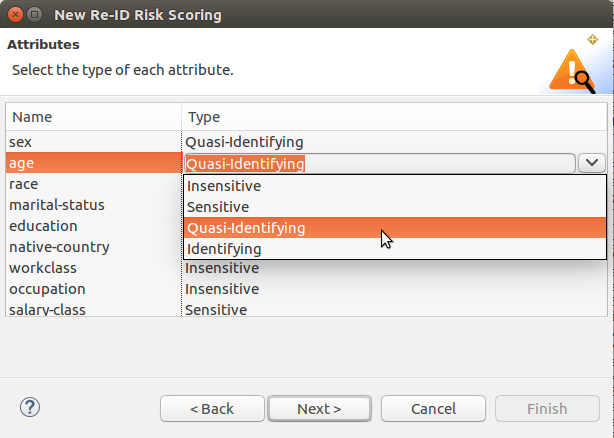 Once you are satisfied with the layout and content of your data, it is time to label each attribute based on the risk associated with exposing these attributes, and how they can be used by a potential attacker. These are, in decreasing order of risk for re-identification: 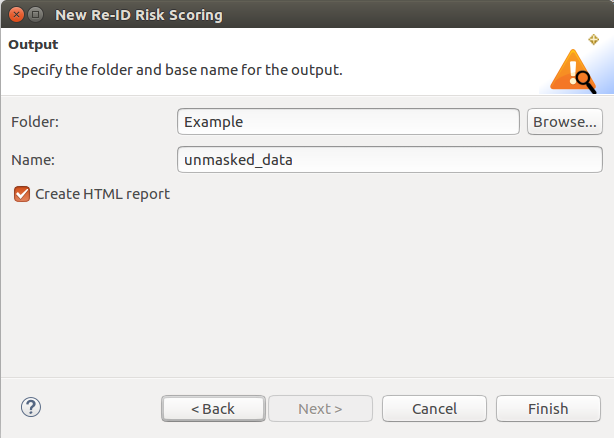 The last page of the wizard allows you to specify your output folder within the Workbench and a name for the output files. From the information that was collected, the wizard will generate a riskscorer model file which can be used to show your risk score, or to make modifications to previous configurations without having to re-create them from scratch in another wizard session.

The output page also provides an option for creating an HTML report based on the generated score. Once you are satisfied with your input, select Finish to generate your results. They will appear in the workbench and optionally in the folder you specified. 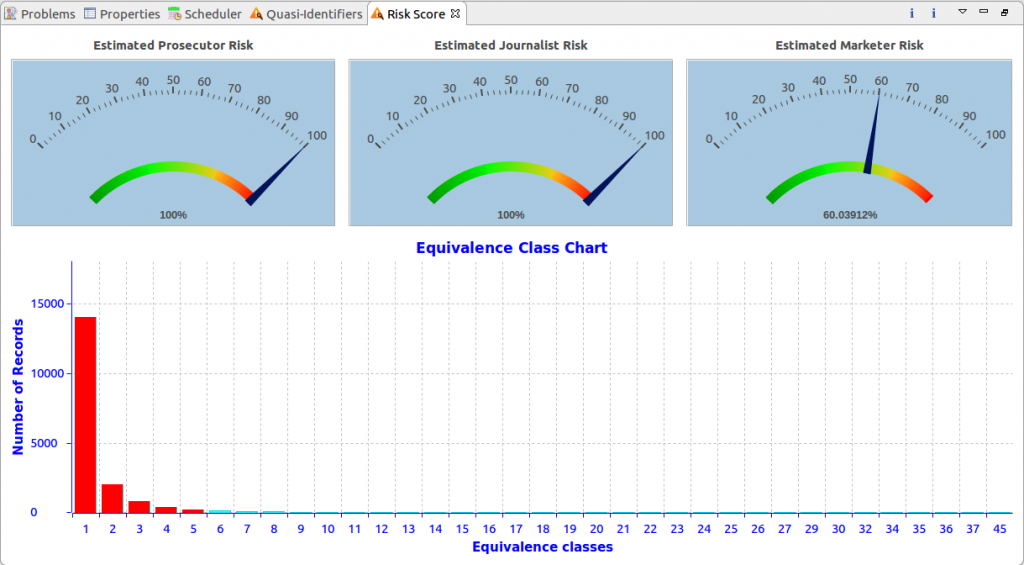 The score view allows you to quantify the risk of re-identification based on the quasi-identifiers in the dataset. The risk is calculated for 3 different attacker models:

The score for your dataset is influenced by 3 factors: the number of records at risk, the highest risk that a record will be re-identified, and the success rate for re-identifying a randomly selected record.

Below the dials is the “Equivalence Class Chart” showing how many records are currently at risk of being re-identified. An equivalence class represents the number of records that share the same set of quasi-identifiers, thus making the records in the class indistinguishable from one another without any background knowledge. 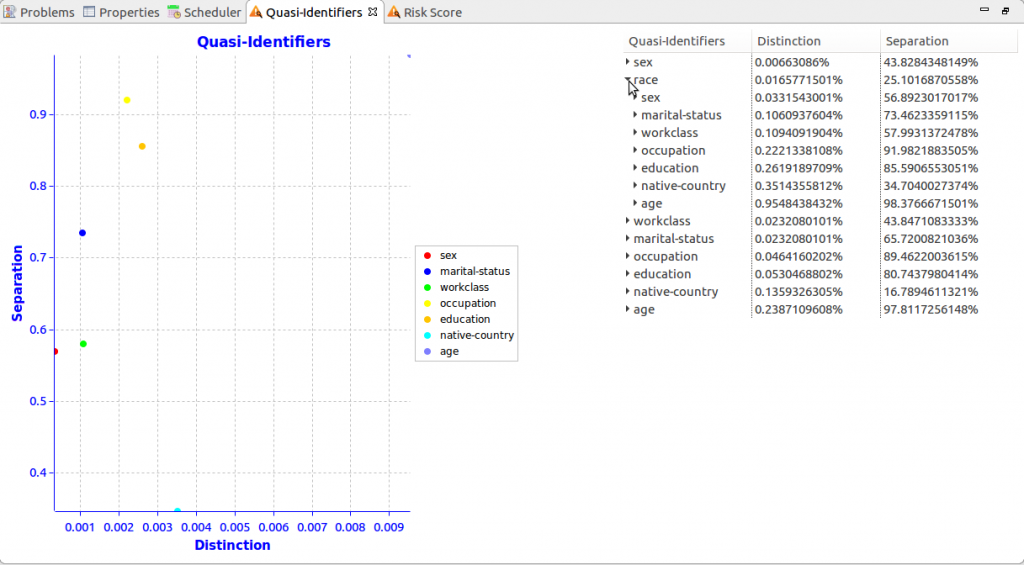 Remember that quasi-identifiers are subset attributes which can be used to identify a record in a dataset, especially when combined with other quasi-identifiers. For example, age alone is a powerful indicator of a person’s identity, but age and race could narrow down the possible identity even more. 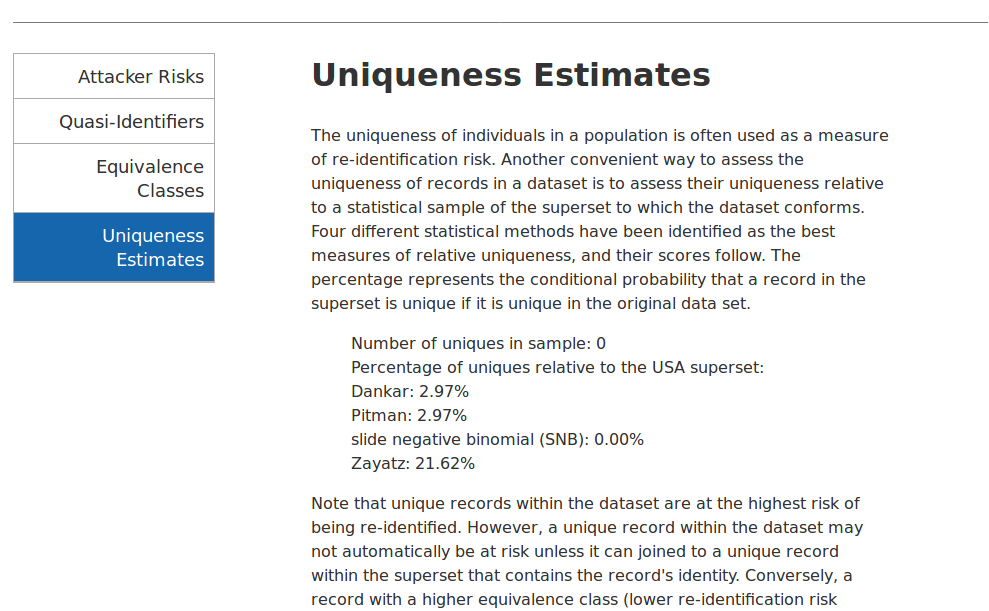 The wizard can also generate an html report which saves into the project folder that you specified. The report provides a more formal and verbose representation of the results. Along with the tabs for the different attacker risks, quasi-identifiers, and equivalence classes, the report has additional information on the dataset’s uniqueness that is not displayed in the two views discussed above.

Having scored the risk of re-identification for the dataset, it may or may not be necessary to have FieldShield perform further de-identification; i.e., masking missed key-identifiers, or generalizing / blurring quasi-identifiers. IRI can help you with these processes, and also refer you to the services of a certified HIPAA statistician and legal counsel to help you assess and use the results, as well as prepare certification and breach defense paperwork.

IRI provides a course in all of the above, described here.  If you need help using the technologies together for HIPAA compliance or another application in which re-identifiability risk is at issue, please contact your IRI representative or expert partner.